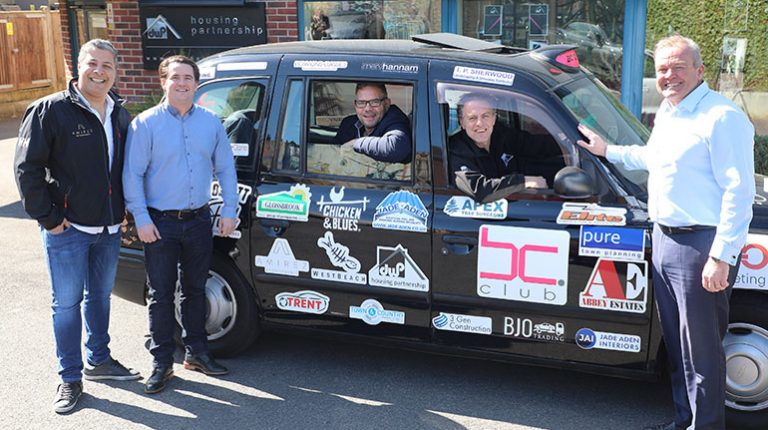 Steve Wells, Managing Director of DWP Housing is one of a group of businessmen from Bournemouth who are part of the BC Club and will soon be taking to the roads to raise even more money for local causes and charities.

The BC Club, which started in 2011, is a group of businessmen who regularly get together for a boy’s lunch whilst also raising money for charity. The club has grown to 39 members and has donated over £352,000 to deserving charities and individuals across Dorset and Hampshire.

Their latest fundraising challenge is the launch of the BC Club taxi, a London black cab adorned with the logos of the member businesses that each member will drive for a week as their only mode of transport.

The idea was born after BC Club chairman Shan Seewooruthun sold his vehicle and his fellow members thought it would be a good idea for him to drive something a little bit different. Fast forward several weeks and the black cab turned up outside of Shan’s workplace in Poole!

Wanting to turn the arrival into something positive, the driving challenge was launched. Each member will be charged £250 to drive the cab for a week and they need to cover a minimum of 150 miles. They will not be allowed to drive any other form of transport during their time or they will be ‘fined’ extra money to go to charity.

“Our members are a bunch of generous individuals all eager to do their bit for charity whilst having a bit of light-hearted fun as we go. Whilst we’ve not set a specific fundraising target, we’re hoping to raise in excess of £15,000, which will be donated to under-privileged children and charities across our area” explained Shan.

“Keep an eye out for the BC cab doing the rounds across Poole and Bournemouth over the coming months and give us a toot…or even a donation to charity!”