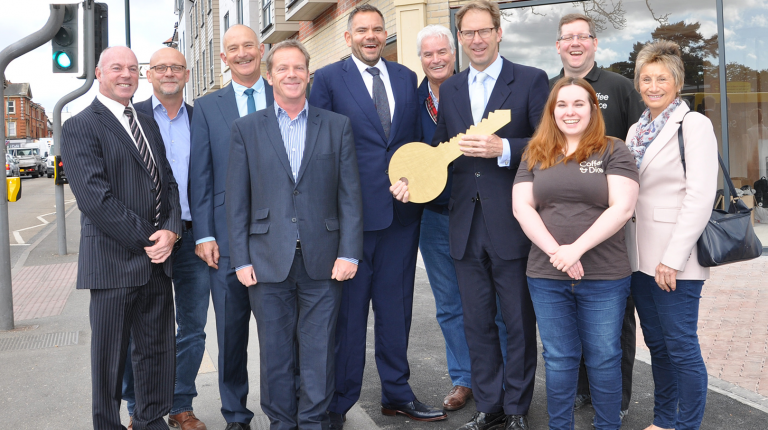 The changing face of Boscombe

An entire street block in Boscombe that was torn down and rebuilt has been officially opened.

The vast new building on Christchurch Road contains 51 flats for the over-50s and seven shops.

At the opening was MP Tobias Ellwood, Cllr Bob Lawton, as well as representatives from Glossbrook Builders.

Almost all the flats have been let and occupying the commercial units will be Coffee and Dice café, a chiropractor, barbers, hair and beauty salon and a martial arts shop.

The site is at 752-778 Christchurch Road and Steve Wells, who heads DWP Housing Partnership, said: “We had owned this block for some years.

“It had been developed in an ad hoc way, which meant there was a poor use of space.

“We wanted to start again and so we applied for permission to demolish and rebuild, and our plans were approved.

“We know there is an acute need for flats to rent in Bournemouth, especially with the over-50s, so these are reserved for that age group.

“It is a four storey building and looks so much better than what was there before. The accommodation is also greatly improved with large, modern flats

“There is also a large building at the rear for locking up bicycles and the location is good because most amenities are within walking distance.

“Glossbrook Builders have built the block with minimal impact on the traffic and the need for the flats is proved by how quickly they’ve been taken.”

Tobias Ellwood said: “I’m delighted to see this mixed retail and residential accommodation of a high standard going up in Boscombe.

“It’s an indication of what the area is and what it can do. It has generous pavement space for buggies and pedestrian movement.

“Hopefully it will encourage further wise development and commercial activity.”

Cllr Bob Lawton, portfolio holder for housing, said: “This is an exciting development with quality housing for Boscombe which will enhance and build upon our regeneration hopes.”