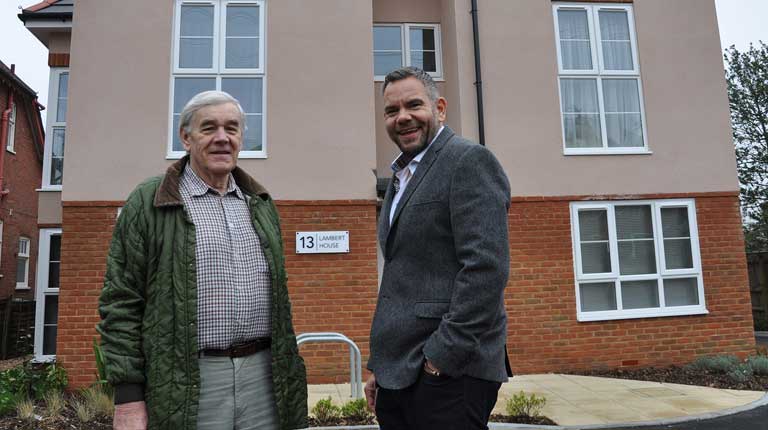 A housing development in Poole has been named after the family who used to live on the site after one of them admired the new design.

Colin Lambert lived at the Penn Hill property after his parents bought it in 1949 when he was three. The family lived there until 1978.

After noticing it was being demolished Colin looked at the plans for the replacement block that were submitted by landlord DWP Housing Partnership.

He was delighted with the look of the block and wrote to DWP to congratulate them, and they subsequently invited him to name it.

Lambert House contains 10 one bedroom flats and it replaces the three storey family house that was built in 1903.

Colin, who still lives locally, said: “It was a wonderful house to grow up in and I had one of the attic rooms which was perfect for when I was a boy.

“I lived there until I was 24 so it had many memories for me.

Colin as a youngster outside the family home

“After I saw it being pulled down I wanted to know what it was being replaced with and when I saw the plans I was delighted.

“It is so in keeping with what went before and I wrote to DWP to say how I liked the plans. They then allowed me to name it.

“So to keep the family name there and as something for my sons I was so pleased when it was called Lambert House.

“The new property has the same look which reminds me of my old room when I was growing up.”

Colin’s parents and two aunts at the property

Steve Wells from DWP Housing Partnership said: “The property was in need of a major overhaul and as with many of our sites we wanted to build new, purpose-built, self-contained flats.

“We always try to be sympathetic to the area and to what went before and that is why we went with the design at Penn Hill.

“To receive a letter supporting our plans is always good to receive – but coming from Colin who used to live there really made our day.

“Naming our properties is not always the easiest of things, so we asked Colin to name this one for us.”